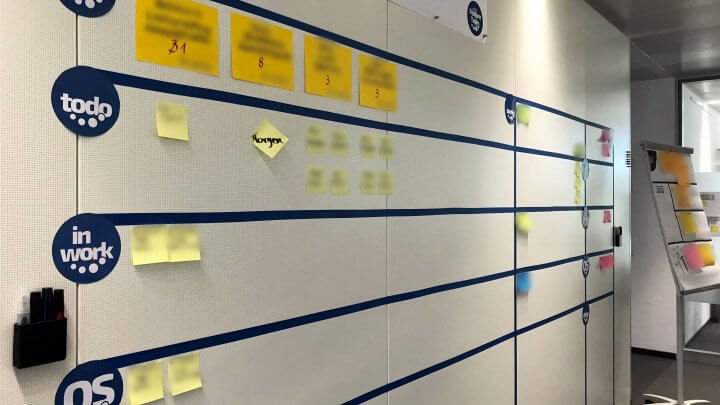 As I already described in Becoming a Visual Facilitator I’m training on my visual skills which encompasses constantly using my new Neuland markers. Since I really love those tools, I wanted my colleagues to have the chance to love those markers, too.

The perfect opportunity occurred when I started on a new project that was supposed to use Scrum but didn’t have a physical Scrum board. The fact on its own wouldn’t pose a problem if the digital Scrum board worked. But it didn’t (and wouldn’t ever in the near future for organizational and political reasons). People hardly had a glimpse of how much of the sprint scope was already accomplished and how much had to be finished.

So here it was: My opportunity to not only establish a physical Scrum board but also to do it with the proper tools.

I took the design of the Scrum board I got to know first (which was not only fully accepted by its team but also fantastically working) and started playing around with it.

After having played around with a dozen of marker and color combinations I ended up with the following markers:

The introduction is a couple of months ago and the physical board is still used and was further improved which is great news.

Later my old project asked me for help and to come back for a couple of months. So there it was again: Another opportunity to put to work what I learned so far.

The quest was obvious: The scrum board was not cleaned up, too small and needed a fresh look.

Therefore I extended the lanes, gave them nice labels in the corporate design as the company.

I also installed three sets of the above described marker setup on the Scrum board using MagneticBoxes for Neuland No.One® Whiteboard so the right markers are always at hand when a sheet must be written.

People can also simply detach a MagneticBox, take it to their working place, write what ever they need to write and put it back at the board.