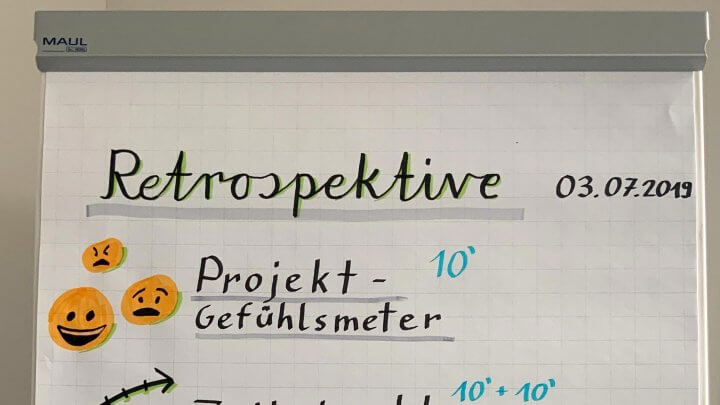 A couple of weeks ago I started my visual facilitator career and started introducing respectively renovating an existing Scrum board to put my newly acquired knowledge into practice.

Now it was time to combine my new skills with my goal to become more proficient in the Scrum process. As I was always a team player who’s goal was to bring people together and treat each other with the most respect possible, it was just natural to volunteer organising retrospectives.

So I started by reflecting on possible issues in my team and find matching activities using the Retromat. Next, I opened up GoodNotes on my iPad Pro and planned my first retrospective.

Seeing my flip charts now make the smile how bad still my writing is but that’s how it is. Things take time and need practice. That’s why I share the work I’m proud of. Although it’s by far not perfect.

A former project I was working for and I got back to was extensively making use of SMART goals. The only problem was. No one tracked if we achieved our SMART goals. So we made up new ones at the end of every retrospective but constantly kept loosing track.

The idea is as follows: New SMART goals are sticked on the top new area. At the end of the next retrospective we would check for each SMART goal how well we did. If didn’t implement the goal well enough it went to the red negative area. If we took the goal too serious it went to the blue positive area. And if the just did right if went down to the green tick area. After each retrospective we did the same. So a good working SMART goal went down to the green two ticks area and so on until it finally went to the bottom area which mean we naturalised it and wouldn’t need to actively concentrate any more on following it.

We later improved our SMART goals chart by simplifying it. That is, we removed the blue positive area since we rarely ever made use of it. Now it also only needs three consecutive retrospectives (which corresponds to 6 weeks) to consider a SMART goal as permanently learned/achieved.